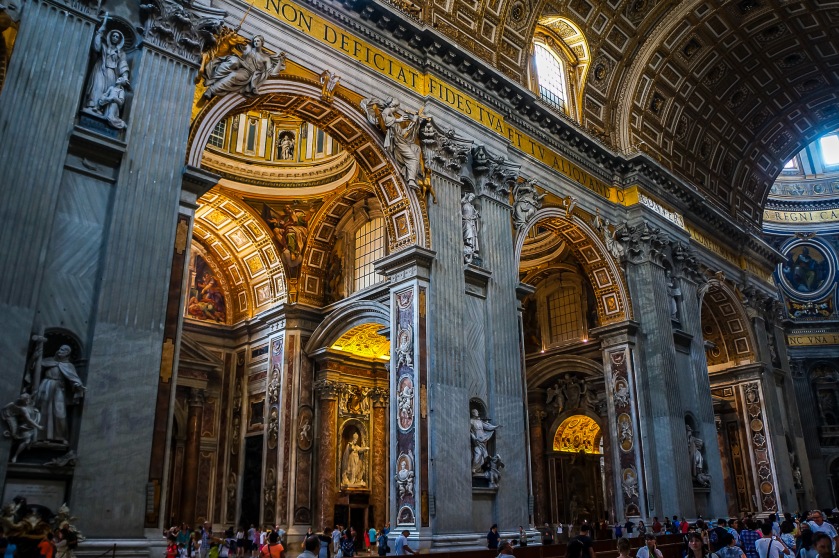 It’s an early start today, as we have booked a private guide for the day, starting at the Colosseum.
As is per our want we walked from our apartment as the owner, Adriano said it was only 1km down the road.
45 minutes later we arrived, already hot and sweaty, to meet our guide for the day, Sara.
Thanks Adriano, me thinks more like 3km!

First stop, The Colosseum.
Impressively large, with a capacity in its day of about 70,000.
The crowds build quickly and early, so we are soon jostling the tour groups for the better vantage points and camera opportunities….thank God I’m tall.

Spent about an hour looking around this outstanding stadium, imagining Russell Crowe all the while.

Actually the film Gladiator definitely helped image life in this cruel place.
Next stop, the Roman Forum, the ruins of the houses of the ruling parties.

It’s also where the cremation site of Julius Caesar is, behind a large stone sculpture wall.
It’s a plain dirt pile only distinguished by some old flowers lying on top.

We left the forum via the Capitoline Museums and Piazza Campidoglio and on to the Piazza Venezia, which houses what is regarded by most Romans as an eye sore, monumento Vittorio Emanuele II, or simply Vittoriano.
It’s a great big white layered pile, which the GI’s in WWII thought resembled a wedding cake.

Impressive statues all around….the Romans love a statue!
On through the lane ways we travelled, already struggling in the stifling humidity, till we came upon one of Rome’s more surprising sights – the Trevi Fountain, or Fontana di Trevi, a huge, very Baroque gush of water over statues and rocks built onto the backside of a Renaissance palace.

More impressive was the two junk trinket sellers who had set up right in front of it!
Oh, and the Centurion strutting about!
They say if you throw a coin over your shoulder into the fountain you will return to Rome.

Oh well…..couldn’t get close for all the tourists, so maybe we won’t be back?
From the Trevi we headed into the real heart of Rome, the centro storico or “historic centre”, which makes up the greater part of the roughly triangular knob of land that bulges into a bend in the Tiber, above Corso Vittorio Emanuele II and to the west of Via del Corso, Rome’s main street.

Our first destination, the Pantheon.
Now, I had no real perception of the Pantheon at all, so was quite gobsmacked by what I saw. From the outside you get no impression of what you will see once you enter, but when you do…..incredible.

Both Rachael and I couldn’t take our eyes off the dome: the diameter is precisely equal to its height (43m), the hole in the centre of the dome – from which shafts of sunlight descend to illuminate the musty interior – a full 9m across. Most impressively, there are no visible arches or vaults to hold the whole thing up; instead they’re sunk into the concrete of the walls of the building
This building is amazing, finished in 125AD, and still pretty much as it was then.
An absolute highlight! 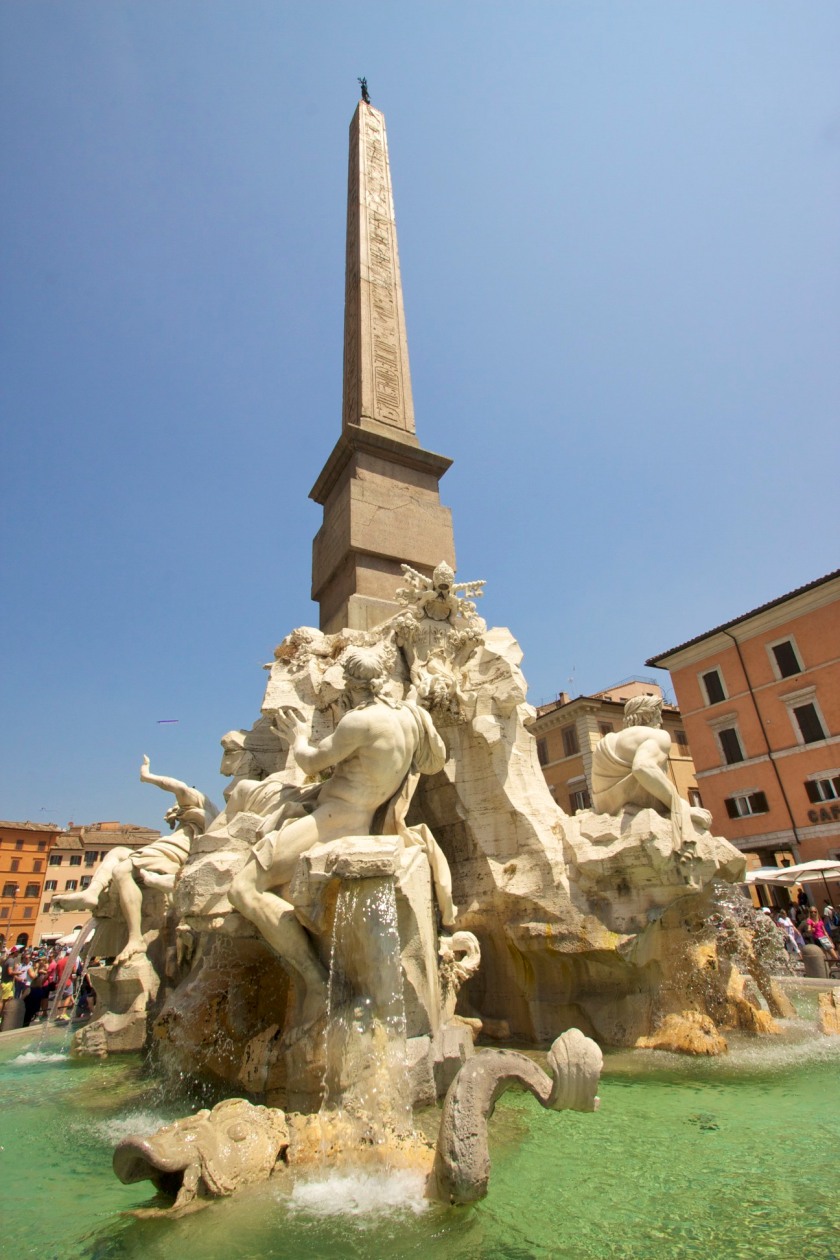 Next Piazza Navona with its impressive central fountain, and the stalls of most original artworks from the humble artisans…how all looked surprising like the hawkers selling flowers elsewhere!
It couldn’t be, could it?
Last stop before lunch….yep folks, we have packed a lot in already, was the old senate where poor old Julius met his maker.

“Et tu, Brute?”
Lunch, coffee, regroup and off by taxi to the Vatican. 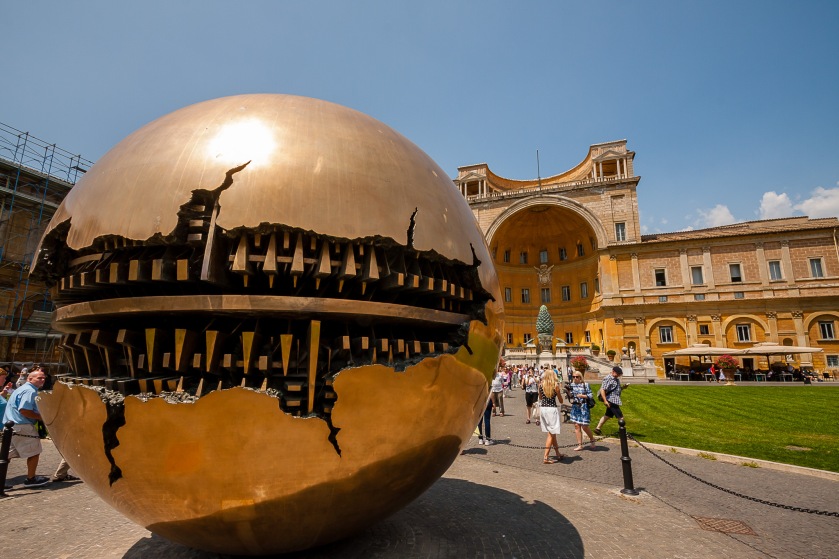 We had pre purchased tickets, so avoided the queues and into the museum we went….then stopped!
Yeah Gods, the crowds!!!

They were relentless, you just got sucked along. Some corridors were so packed the sweat poured off you.
There were some pretty impressive artworks/sculptures etc, but you couldn’t spend any time to appreciate them. 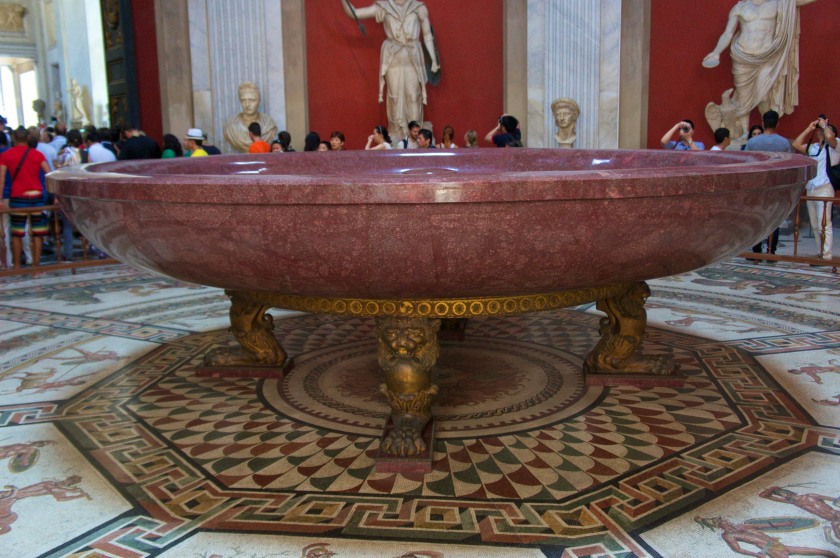 Nero’s bath, which was huge, was a highlight, as well as the ceilings in the halls, but it was all a bit overwhelming. And HOT!
Our guide, Sara, did a great job filling us in on significant pieces as we staggered along, until we finally entered the Sistine Chapel and the ceiling paintings by Michelangelo.
The chapel is surprisingly dark, and packed, and is completely covered in works of art.
You’ve all seen the photos and documentaries so you get the picture.
I personally was a bit underwhelmed by the chapel, smaller than I expected, and all a bit distant and impersonal. Too many people, too many guards telling everyone to put their camera’s away and be quiet. SILENCIO!

Down another corridor, and into the Basilica.
Whoa….huge, impressive, monumental, unbelievable.
The biggest basilica in the world, just enormous.

By Roman Catholic tradition, the basilica is the burial site of its namesake Saint Peter, one of the twelve apostles of Jesus and, also according to tradition, the first Bishop of Rome and therefore first in the line of the papal succession. 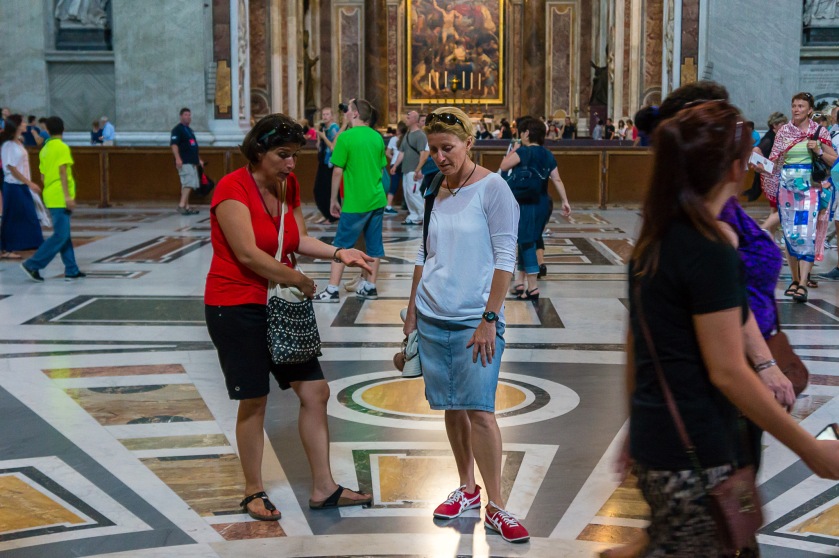 Tradition and some historical evidence hold that Saint Peter’s tomb is directly below the altar of the basilica.
To see it was worth all the crowded sweat we had endured till then, an absolute highlight.

To finish our tour Rachael went shopping at the religious shop, coming out with a set of rosarie beads, personally blessed by the big fella himself!!
After 8 hours our tour was complete, Sara was fantastic, well worth the dollars spent….and spent we were! 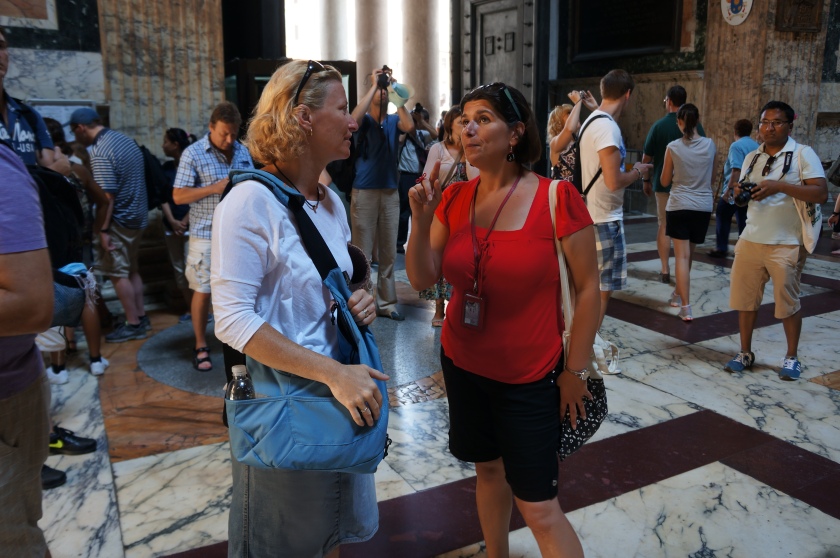 Back to our place, de-skanked, went out for a beer, then dinner and bed.
A VERY long, but fascinating day in Rome.
Loved it.