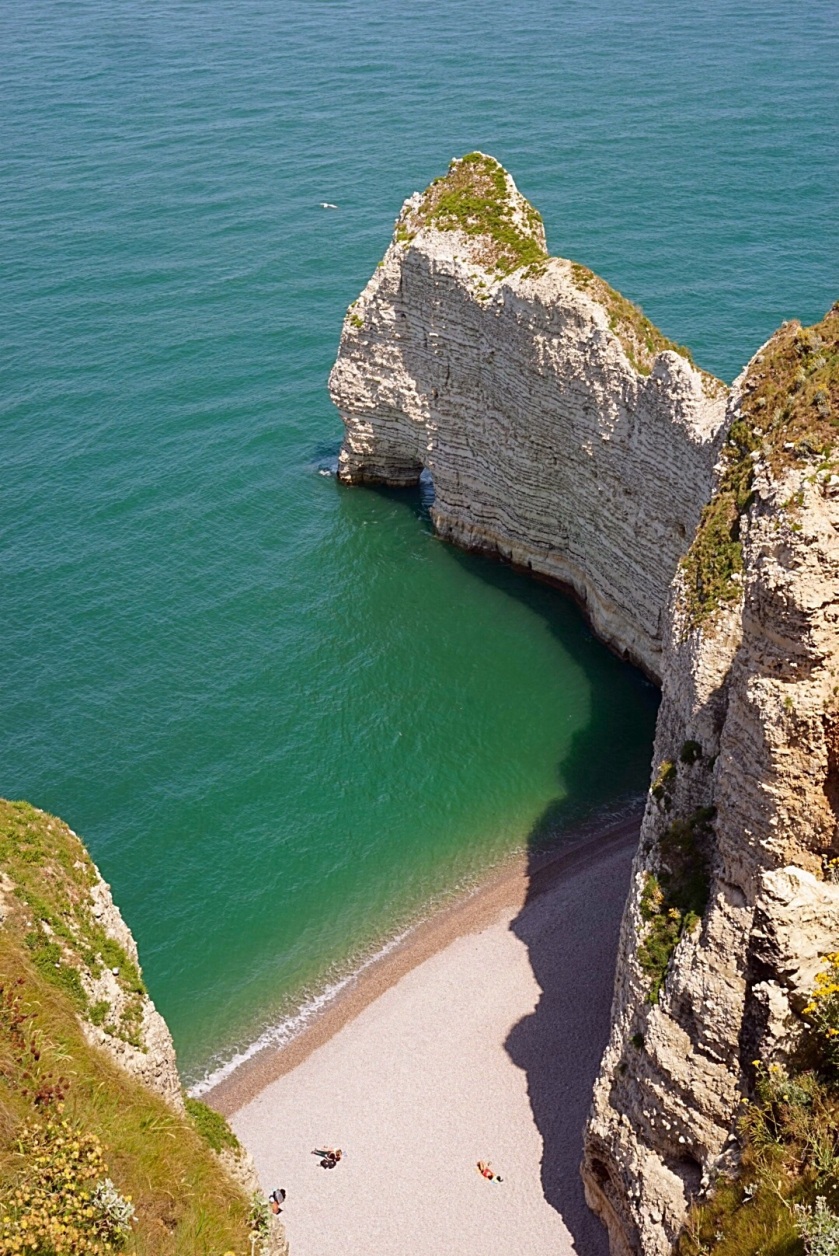 The thunderclaps of duel storms put paid to any sleep in this morning, peels of thunder chasing lightning right on top of us from about 8am.
It was almost as impressive as the gourmet breakfast served up again by our hosts, Annick and Paul.
You sit down in a beautiful dining room with fabulous cutlery and crockery, being served pastries, crepes, savoury quiches, pastry parcels, shot glasses of palate cleanser fruit purees, coffee……the works.

Conversation with the other guests is lively, plenty of travel talk and cricket discussion with the poms!
Can’t speak highly enough of our pad for the last two nights, exceptional hosts who go the extra mile to make sure everyone feels special, from the home made cakes in the afternoon, to the cider on arrival, the unbelievable breakfasts, the little finishing touches and attention to detail that stand it apart.

This place would be the best we have stayed at in both our trips to Europe, and most highly recommended.
We waddle out the gate at about 11.30 and head off up the coast to a few places recommended by Annick, which seemed better than our plan to drive to the city of Rouen to see the landmark that was Joan of Arc’s barbecue!! (Sorry, a bit insensitive!)

First stop on our coastal trek North, d’Etretat, and the ‘Falaise’, being cliffs….and quite the spectacular cliffs they are, in both directions.
Magnificent! 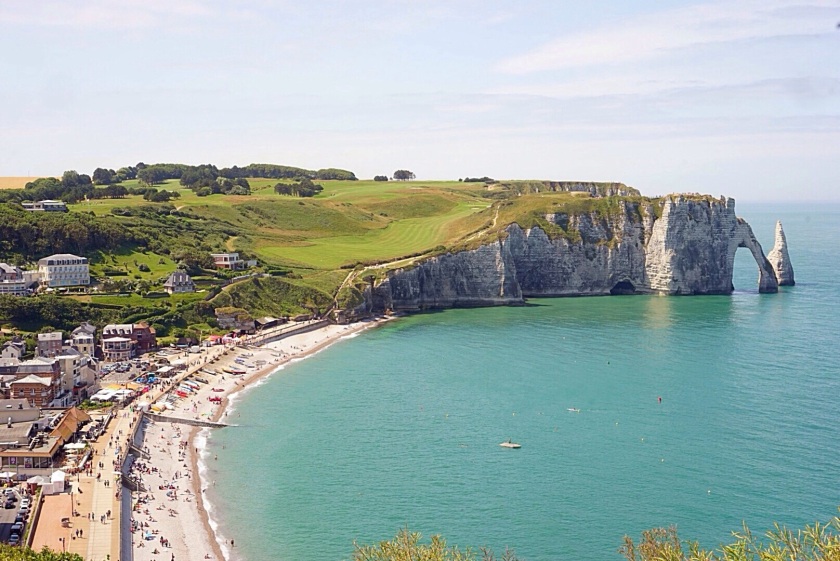 Steep white cliffs bounding out of the sea, surrounded by rolling hills of pasture and bovine delight.

Many a photo opportunity, just don’t take the that extra step back, it’s a long way to the floor, without any barriers to halt your fall. 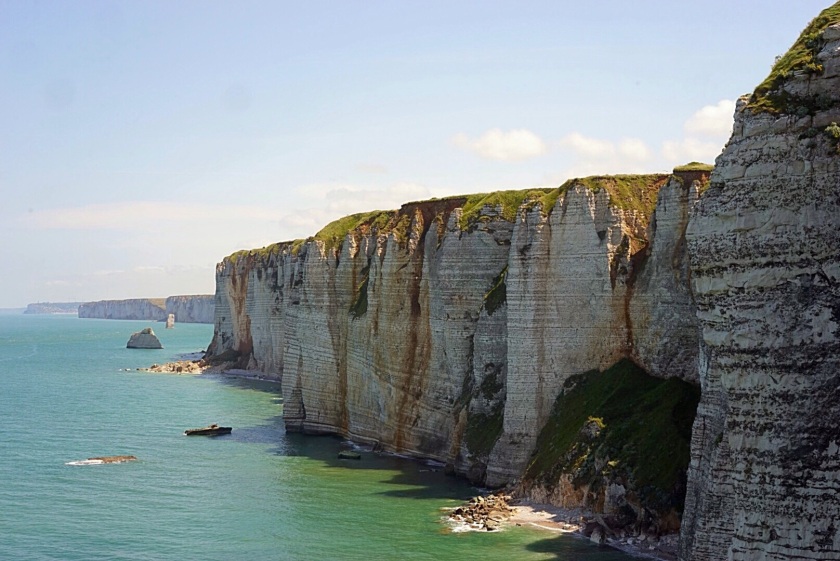 In Australia the place would be surrounded by cyclone fences!
Beautiful….. 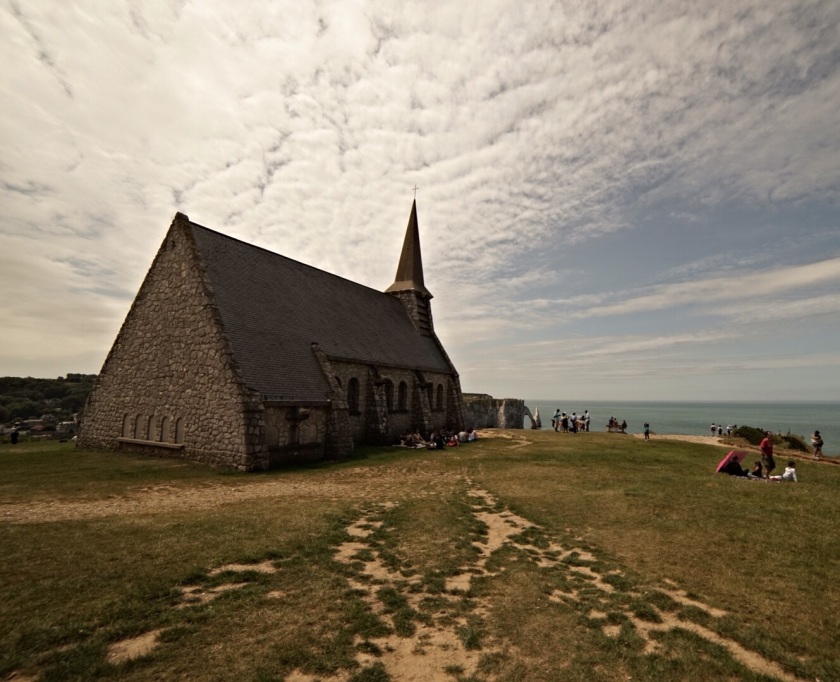 We headed off to discover tiny little villages all decked out with colourful bikes, flags flattering everywhere, signs all about….Le Tour de France is coming through Normandy, and the towns are decorating up a storm.

Stage 6 on July 9th is a very exciting time in these parts, and a stunning backdrop it will make, so set your alarms folks and check it out this Thursday evening. 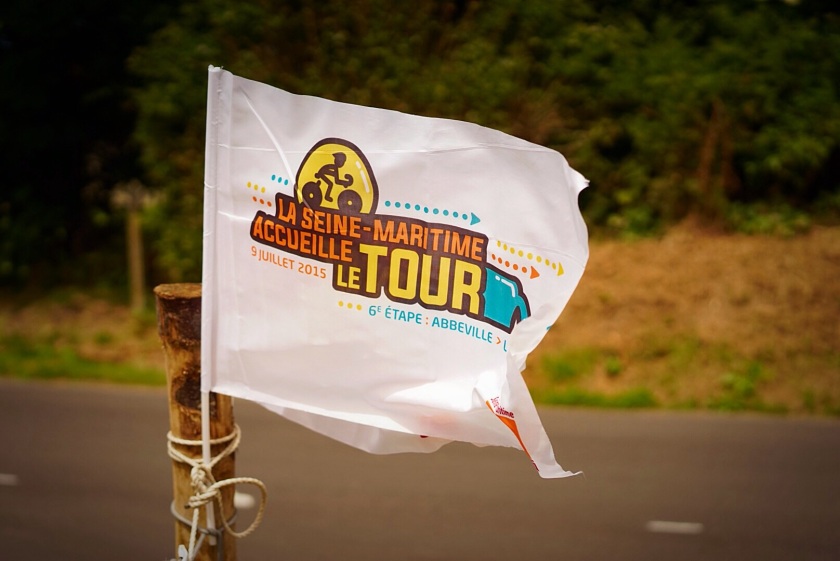 Our next stop is the port town of Fecamp with its fancy architectural ‘Palais Benedictine’, the folly of the originator of the liqueur, Benedictine.

Nice harbour down the road, not much else, except the purchase of a great soft cell thermal yachting jacket in a muted orange which will set off the colour of my yellow pants beautifully!
Too hot to wear on this trip, but look out Mount Martha!!
So….off to stop number three. 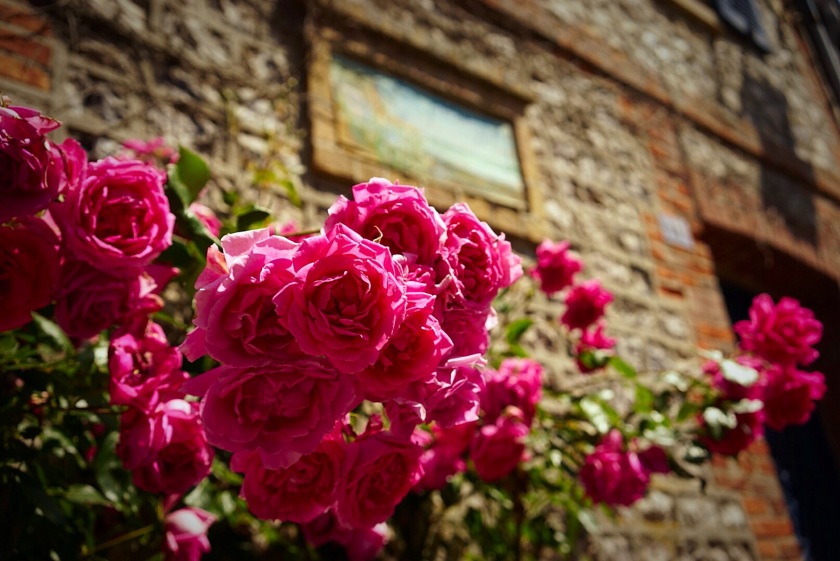 Veules-les-Roses, a quaint village by the sea with plenty of, yep you guessed….roses!
This town is one of five along a short section of Normandy coast which cater to the swish Paris set.
Lovely rose scented streets leading down to the rocky beach with sheer white cliffs each side, a toddlers pool by the walkway, and the usual odd assortment of bodies sunning their lillywhite skins.

A beautiful setting, and a fabulous part of France. Normandy exceeded our expectations tenfold, the countryside is picturesque in the extreme, the tiny villages the stuff of postcards, and the people friendly and accommodating.

You could spend weeks in this part of France and never be bored, too bad we only had five days, must come back!

Onward to Amiens, our home for the next two days and base for travels to the battlefields of the Somme.
Amiens isn’t much of a town, pretty much flattened in both wars and now a drab post war mishmash of styles except for a towering Cathedral smack bang in the middle of town, surprisingly, and more surprisingly survived all the bombs thrown at it.
For the first time this trip we are staying in a hotel, the Mercure which is right next to the Cathedral, so perfectly positioned for us. 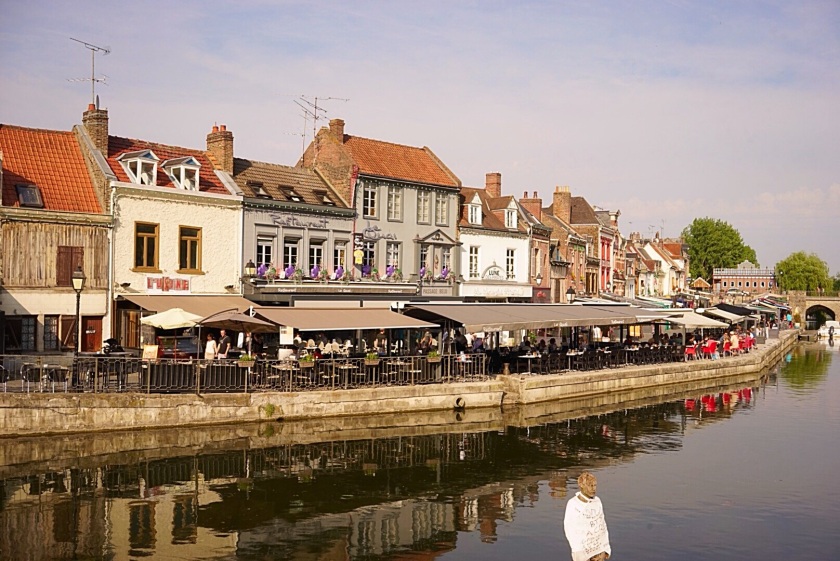 Just around the corner is a bar/restaurant region surrounded by canals branching off the Somme river. Pretty nice area with plenty to choose from, so plonked down by the water and had a very pleasant meal washed down with a wine or two.
Like other large cathedrals, this one also has a light show depicting its history, so at 10.45 we headed to the footsteps up front to be wowed again.
We listened to fascinating commentary of the Notre Dame’s colourful history of the 22 Kings that stretch across the entire facade, heard exciting tales of pilgrims and saints shown here in the portals overlooking the square, look up in amazement whilst tales of derring-do are breathlessly re-encountered…..all in French!

Oh well, we are in France I guess!
As far as the light show itself, well it did highlight the Kings, but it didn’t have the colour and movement we have been spoilt by previously, which after all the hype was a bit of a let down.
Still the place was busy with people crowding around the portals taking millions of photos, so there must have been some significance in the commentary.
Lights go off at the Cathedral Notre Dame d’Amiens, and for us!