Up early for a run before brekky and a quick macchiato before catching a cab to our hire car and heading off to Assisi. Hugh was a true expert at the wheel, he has got this driving caper down pat.

The drive was simple enough, managed to avoid the tolls and arrived in Assisi around 2.30pm. Disappointing news upon arrival, Beerock was 6kms from where we were staying which meant someone had to drive, so the idea was quickly ditched and Assisi it was for the night.

Views of this beautiful town from afar looked amazing and we were not disappointed upon arrival. Managed to find a park near the Hotel, quickly grabbed our 20kg luggage before the rain clouds closed in and a heavy downpour ensued. The welcome relief from the heat was greatly appreciated, it was a strange feeling to actually feel coolness instead of stifling heat. 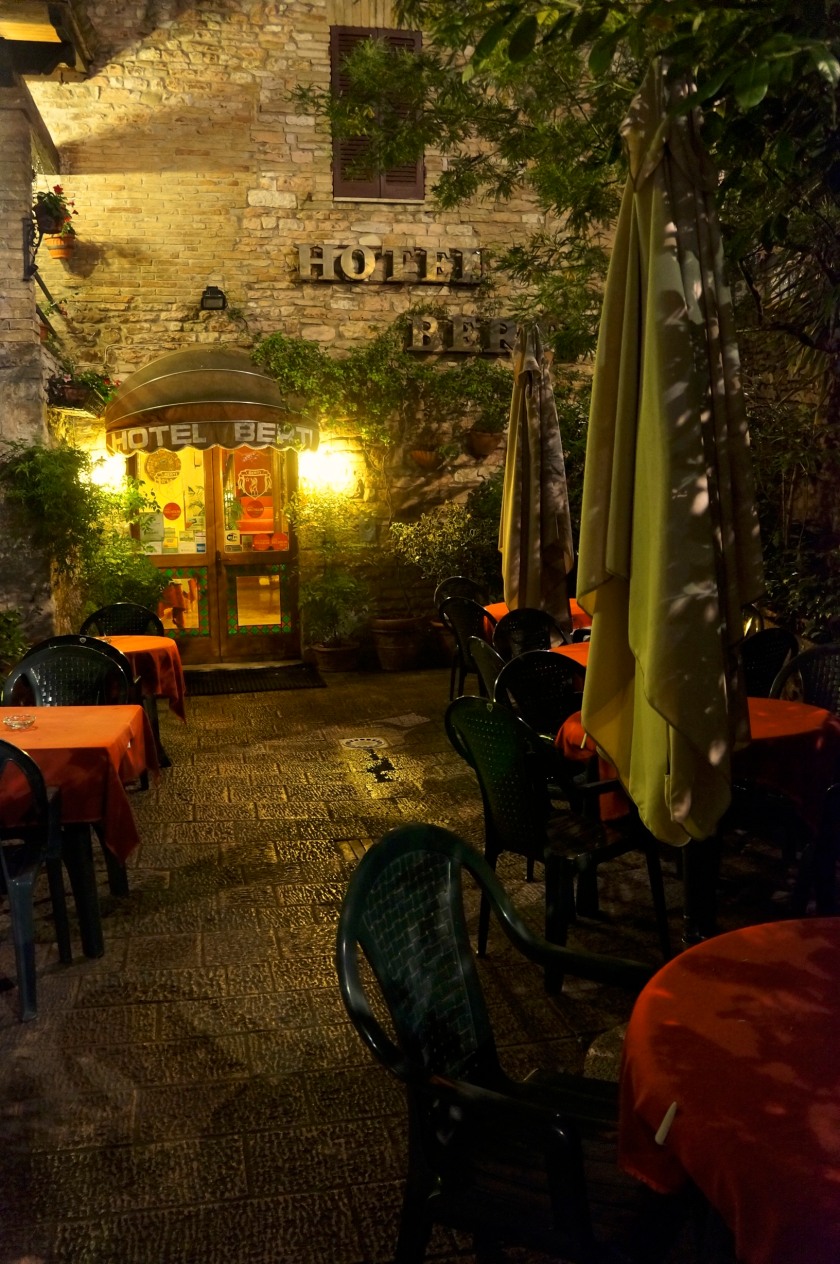 Once the rain had passed after half an hour we headed out to explore Assisi. We took in the Basilica of St Clare, which holds the tomb of St Clare herself and the crucifix that spoke to St Francis, both of which hold much meaning to the folk of Assisi. Next on the Agenda was San Rufino which houses the ancient christening font where St Francis and St Clare were baptized and also a Museum housing the works of Puccio Capanna and Niccolo Alunno. Upon learning there was a fee of €3.50 to visit this Museum, we decided to further explore the free Chapel and do away with the Museum, we needed a day off from all Museums. From here we then visited the main attraction, the Basilica of St Francis.

This housed the tomb of St Francis and is also 3 storeys high, with each level dedicated to the life of St Francis. This was a magnificent Basilica showcasing the life of St Francis and the work he did in Assisi which is why this beautiful town owes so much to his life’s work. Back to our room for a re fresh then out again to a magnificent wine bar called Bilbenda. Here we sampled the best wine the Umbria Region has to offer, not to mention the local beer made by the Franciscan Monks, delicious.

We were also provided a sample of the local bread made by the Monks, and this too was magnificent. These Monks sure know how to brew a beer and make some bread. 1.5 hours later and significantly carbo loaded, we headed off for a light dinner to further sample the local fare and wine, and were again suitably impressed. 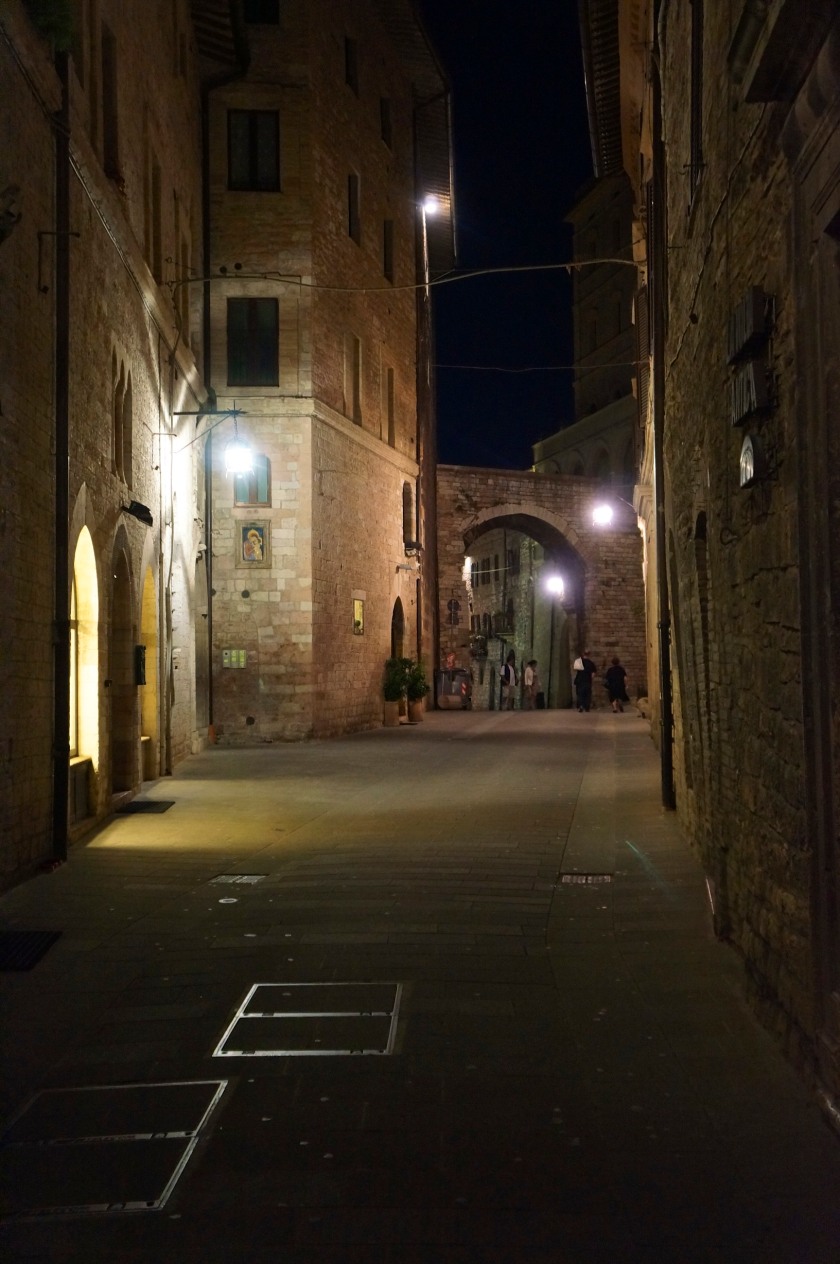 In addition to dinner, we also had the local orchestra (horn section only) play the latest tracks from Grease the musical, Bryan Adams and a little bit of classical music, appeasing to the masses, I’m sure. 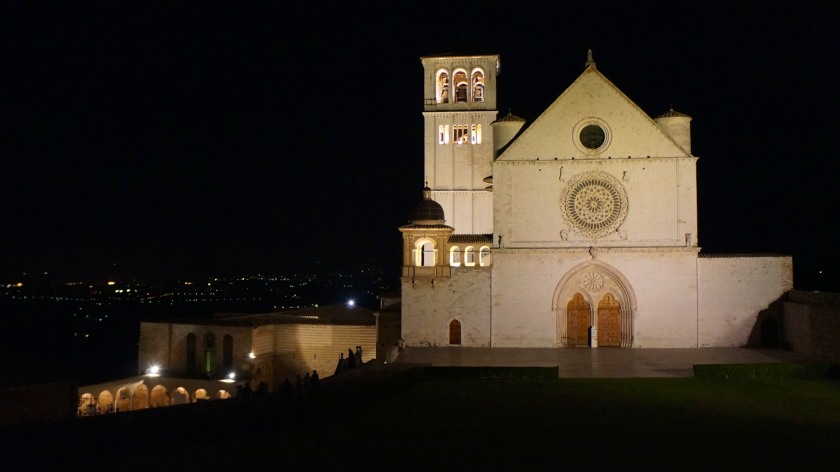 A walk around the city at night after dinner, a few more photos and we were done. Up early to further explore this amazing town before heading off to Tuscany around midday.