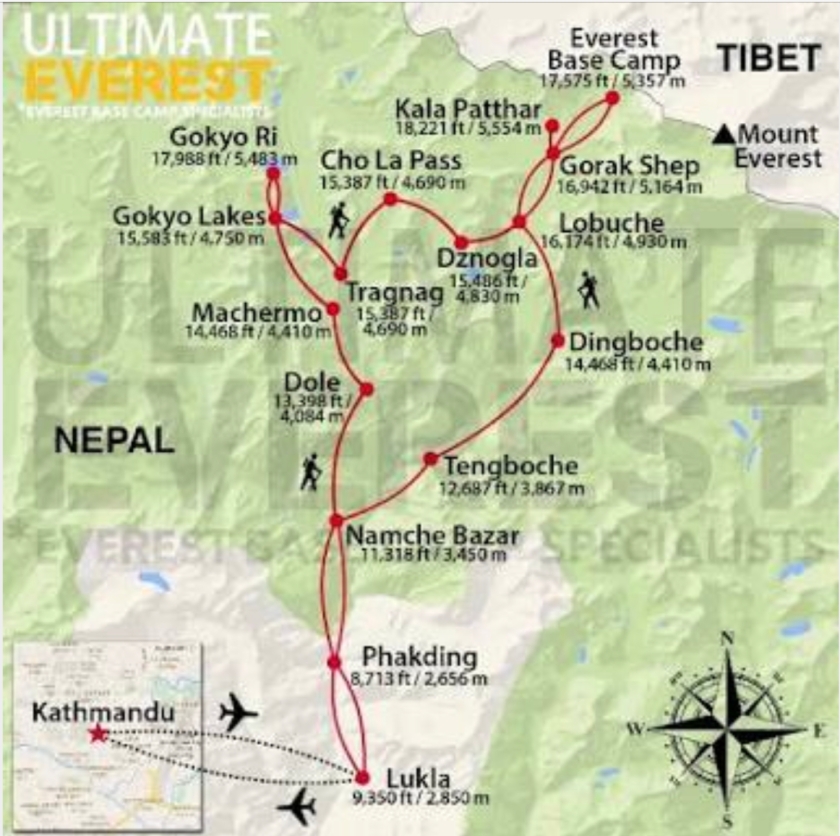 A busy day today with a 4am start to be at the airport by 6, for a 6.30 flight to Lukla to start our trek.
That is if the weather permits us flying, as the airport at Lukla is a manual landing requiring visual contact with the runway.
Lukla airport is regarded as one of the hairiest places to land in the world, being both steep and short, finishing up the hill by a stone wall. Go too fast and the wall greets a new friend, misjudge the landing and crash into the ravine.
Being able to see the runway becomes somewhat important, and the early morning weather deemed this improbable, so we sat around the unairconditioned departure lounge waiting for the clouds to lift.
6.30 turned into 9.30, then luckily we had the all clear to board for the 30 minute flight on a tiny 17 seater twin prop plane. But not before sitting on the tarmac for 30 minutes in the searing heat with no air conditioning in the plane, save for the pilots leaving their doors open whilst we waited for our turn. Talk about building up the suspense!!
The flight was spectacular with stunning views of the Himalayas through the clouds, before the crazy landing, which once completed induced spontaneous applause.

Another flight landed right behind us, and that subsequently became the last for the day.
Our lucky day, celebrated with an early lunch in Lukla (2850mt) before heading off on the relatively short walk down to our overnight stay in Phakding (2650mt) 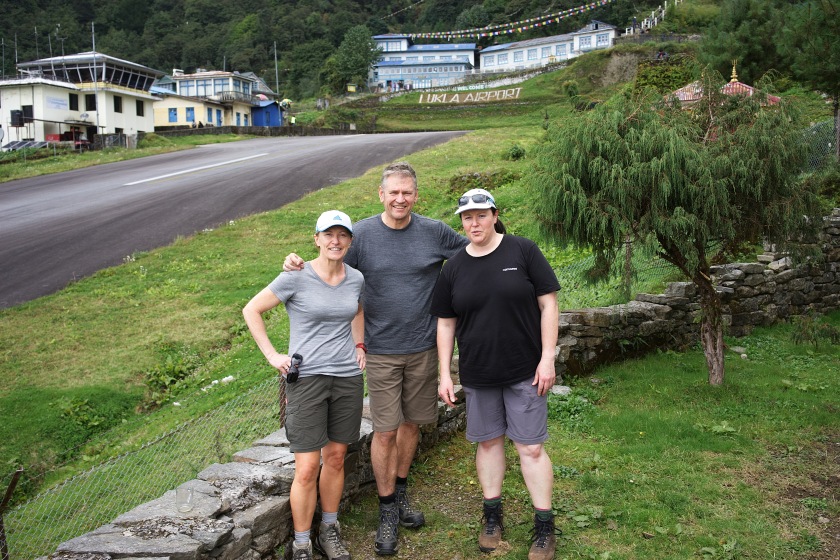 Slow and steady we go acclimatizing with regular stops and plenty of water.

The walk to our accommodation took 3 hours and already you can start to feel the effects of altitude. We have been joined for the first few days by a crew doing the classic base camp trek, who we met on our second day in Kathmandu. Two Canadians, Mike & Rob who met on a trek in Peru a couple of years ago, became buddies and now trek together. Nice story! Two Poms, Steve & Hannah, and an Aussie from the Gold Coast, Steve who is quite the character….but more on him later.

Upon arriving into Phakding it was a cruel steep stair climb up to our accommodation where we were welcomed with a coke, tea or coffee.
We are staying in tea houses throughout, which are a little like old style ski lodges with a dinner room, with separate sleeping quarters, very basic with two single beds, no heating and wood everything!

We keep hearing that the dorms are cold, and I can see why!
If you want a shower, join the queue after paying 500nrp ($5), or just stink it up!
Off to our rooms to change for the evening before meeting again at 6:30 for dinner, our only challenge was to stay awake for it.

Up at 6am after a restless nights sleep, surprising warm and humid, with not much give in the paper thin mattress.
Breakfast was great, a mix of pancakes, eggs or potatoes, spuds being a staple up this way.
Tea or coffee, and off we go at about 8.30 for a long 8 hour day.

We are ascending 800 metres today which is the most in a single day for our trek, and slow and steady is the go.

Acclimatising requires a very slow pace with plenty of stops along the way, including an hour for lunch.

The first 4 hours was reasonable comfortable thru verdant forest of pine, fern and grass lands following the most incredible river which streamed and swirled relentlessly, a rage of whitewater. 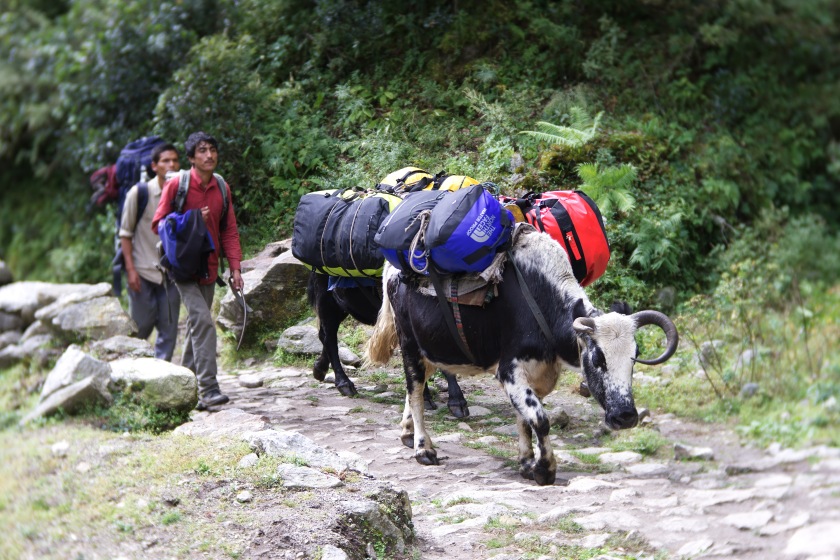 Lunch in a tea house cafe with incredible views, was followed by 4 hours of tough walking, mainly up, with thousands of uneven stone steps to break up the momentum.

The highlight of the day was the five river crossings over suspension bridges, especially the last one which about 250 metres long, hovering about 125 metres above the raging torrent, with an older bridge laying dormant below. 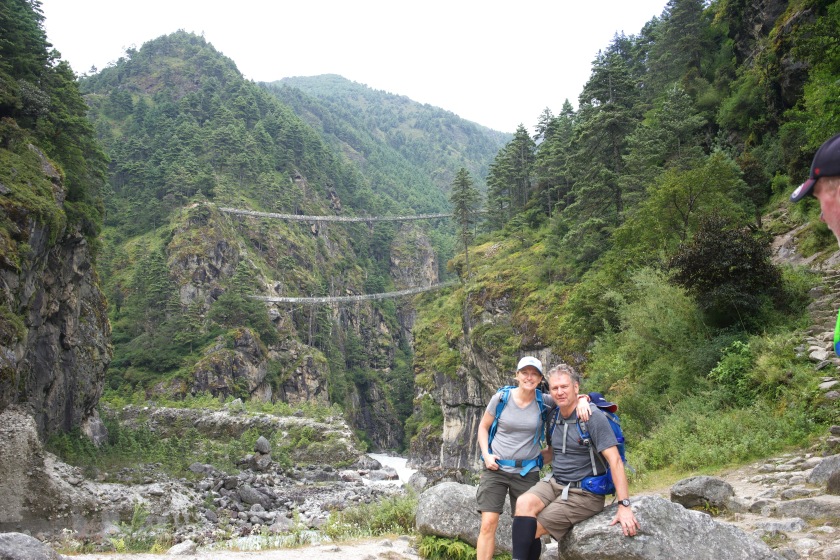 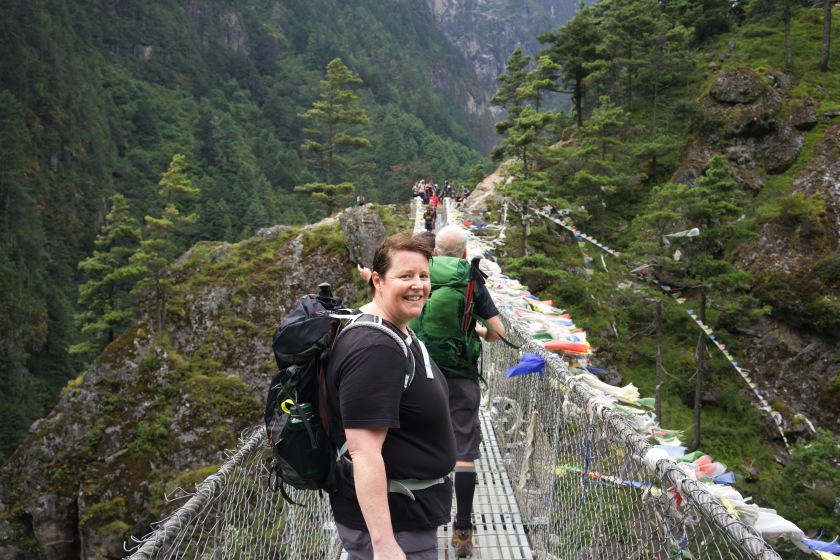 Liz sat down, and stated this this was “the hardest day I’ve ever had”.

Happy days, this morning we had a sleep in until 6:30 as today was an acclimatizing day in Namche. Every 500 meters gained, or there abouts is followed by a day climbing higher, then returning to sleep lower. A leisurely breakfast followed at 7:30 before we all packed our day packs ready for our 400 metre acclimatising walk up to the Namche airport, which should be about 3.5 hours there and back.

Along the way we stopped at the Monument dedicated to Tenzing Sherpa, the first Sherpa to scale Everest with Sir Edmund Hillary. The backdrop to this wonderful monument was our first glimpse of Mt Everest and another nearby mountain Lhotse. As the clouds parted and the sun came out so to did everyone’s cameras to capture this magnificent sight. Everest is the tiny peak in amongst the clouds to the left of the statue.

Phew, having come all this way there is always the chance you don’t see Everest due to the weather, but now that we have, we breathe a sigh of relief and continue on our journey to see Everest even closer up over the next few days. The monument below has a stone from the Dead Sea, the lowest altitude on earth, and a rock from the top of Everest. \\\\\\\\\\\\\\\\ A quick visit to the Sherpa museum before heading off on our 400 metre ascent, straight up.

Slow and steady we went, the purpose of our walk was to continue acclimatizing but it also gave us a fabulous view of Namche from up high. For a walk that took 45 minutes to climb, you can really feel the affects of the altitude. We reached the top which took us to 3700 metres but did not go to the Mt Everest Hotel as the clouds were starting to roll in and the visibility of Mt Everest from that vantage point was lost for the day.

We returned back to our Hotel, had some lunch and free time for the entire afternoon.

Namche is the largest village in the region, and a thriving little town it is, chock full of trekking shops, local wares, grocery stores to top up on supplies, and most importantly, some really good coffee shops. 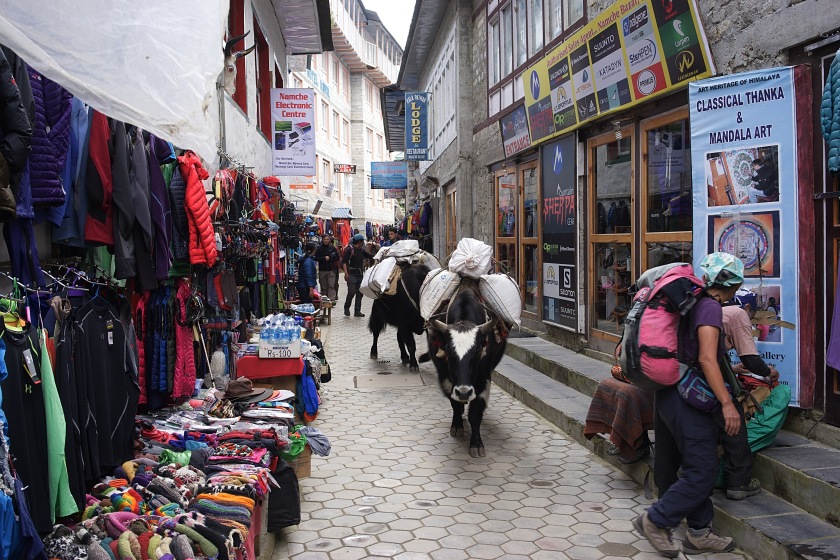 We love the acclimatizing days, so relaxing in comparison to what we have done so far.

Tomorrow we head off towards the Gokyo Lakes, which will take us 4 days, before crossing the Cho La Pass, another 2 days and then a few more days heading towards Everest base Camp. From this point on we have no WiFi access so our Blog will not be posted until we return to Namche in 2 weeks. Wish us luck as embark on our Everest journey, no mean feat, but one we have trained for and are ready to conquer.