Today is a very exciting day as we finally get to see one of the most iconic places in France if not Europe, Mont St. Michel.
When we were planning our last trip two years ago this was high on the ‘must do’ list along with D-Day but logistics got in the way and we had to bypass Normandy, but not today!

It’s going to be a long day and the weather is stinking hot, so travel light and hydrate.

Speaking of the weather (sorry Mornington Peninsula!), Europe has been in the grip of a monster heatwave, the hottest in a century, and temperatures have been up 15C above average.

So, up and at ’em early! 7am early, with pastries from the lovely patisserie next door then follow the GPS to the island 75km away.
Our friendly guide sends us down country lanes dotted with tiny hamlets, stone walls leaking onto the road, rambling two storey cottages lurking down at us,and many a surprised cow wondering what the hell these dumb Aussies are doing on their roads!?
Beautiful countryside, very narrow roads….luckily little oncoming traffic.
Finally a dual carriageway and we’re hurtling down the road at 130kph, boring but quick.
As you pass through the town of Avranches you get your first glimpse of the mount, and the excitement grows, it is an amazing sight appearing in the distance as if floating on water, a huge abbey reaching to the heavens.

We park about 3kms out and catch a shuttle bus to the mount, and the view only gets better and better.
All those photos in travel guides don’t really prepare you for Mont St. Michel up close, it steeples up, soaring out of a wall of stone with alarm, a glorious abbey perched on top.

It really is an incredible sight, and one seen by millions each year, the third most visited sight in France behind the Eiffel Tower and the Louvre.
Hence getting up early to beat the crowds, which we surprisingly did. In fact we walked through the gates on our own with barely a soul around, got such a shock we doubled back looking for the ticket booth only to discover there isn’t one, you only pay for the Abbey, and that’s at the top of the hill.
A steep hill, many steps, many fit monks! 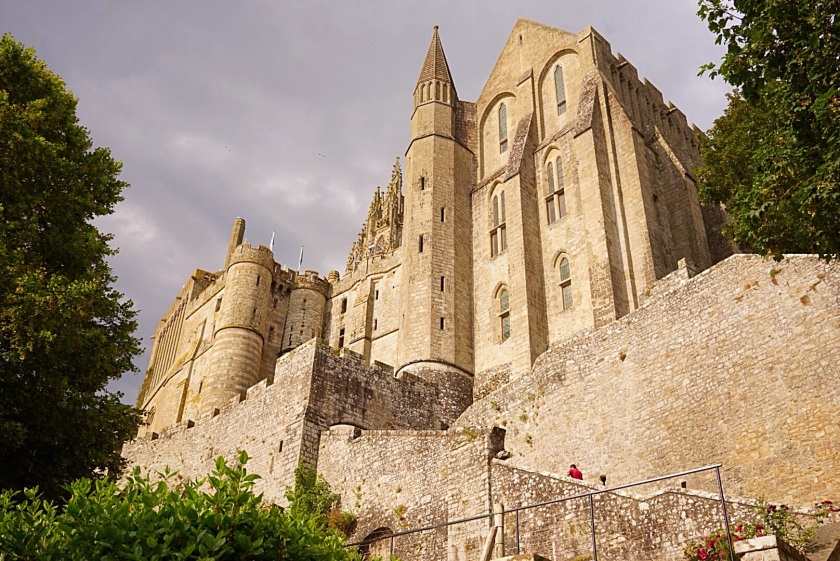 The Abbey dates back to the 10th century, with extensions in the 12th & 13th century. Defensive walls were built to protect it during the 100 Year War of the 14th century, and further works were done in the 15th, making it quite the renovator’s delight.

A living monastery for most of its life it naturally became a prison for a time, which seems to be becoming quite a habit for the French!
The Abbey is a rabbit warren of rooms, most with glorious views, most places of prayer and contemplation, from small chapels to larger open spaces.

It would be the coldest place in winter, draughty dark and foreboding.
Very atmospheric.
Terrific, well worth the worn souls….I mean, soles!!

We followed winding narrow paths heading slowly back down the hill, went up the main ‘street’ filled with overpriced eateries and souvenir shops, finally heading back out to wonder at this marvel from the footbridge. 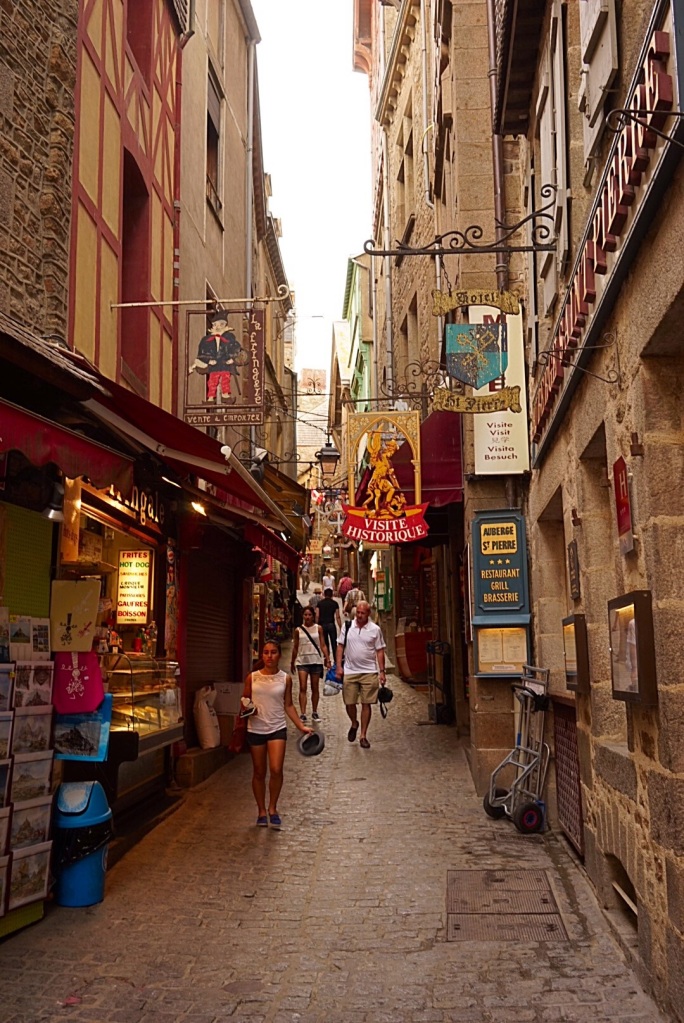 A great stop, so happy to have finally made it, and exceeded all expectations.
A BIG tick!

Lunch, then back whence we came to the D-Day beaches, specifically Omaha Beach and the Normandy American Cemetery and Memorial. 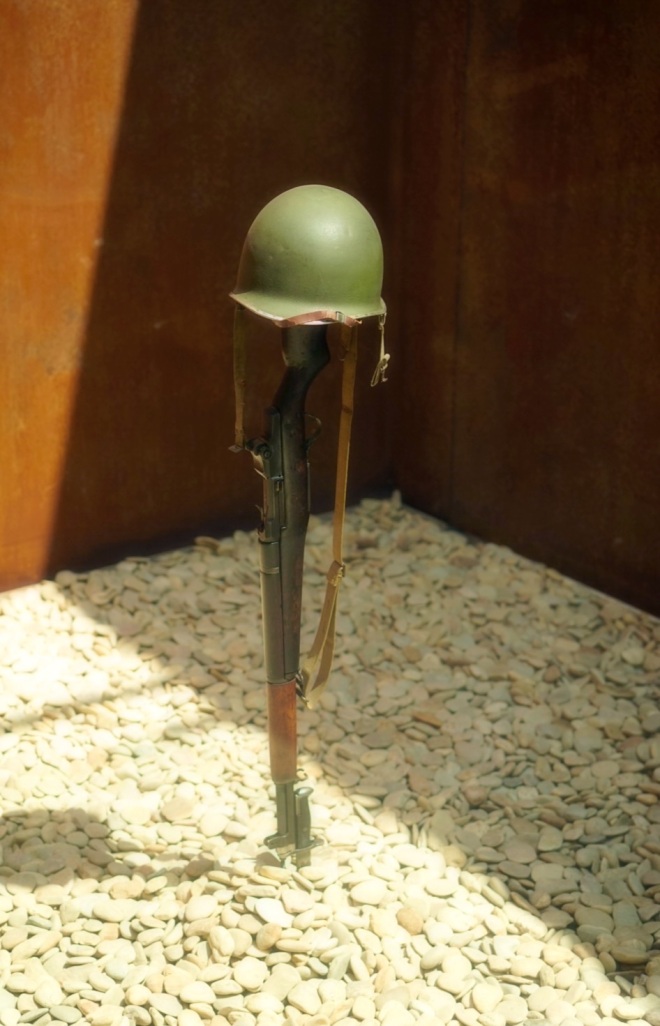 If you’ve seen ‘Saving Private Ryan’ you’ll recognise the cemetery from the opening scenes, a beautifully manicured and maintained memorial to those that fell during the Normandy conquest.
80 hectares, 9238 headstones, 1557 missing in action, 45 sets of brothers. 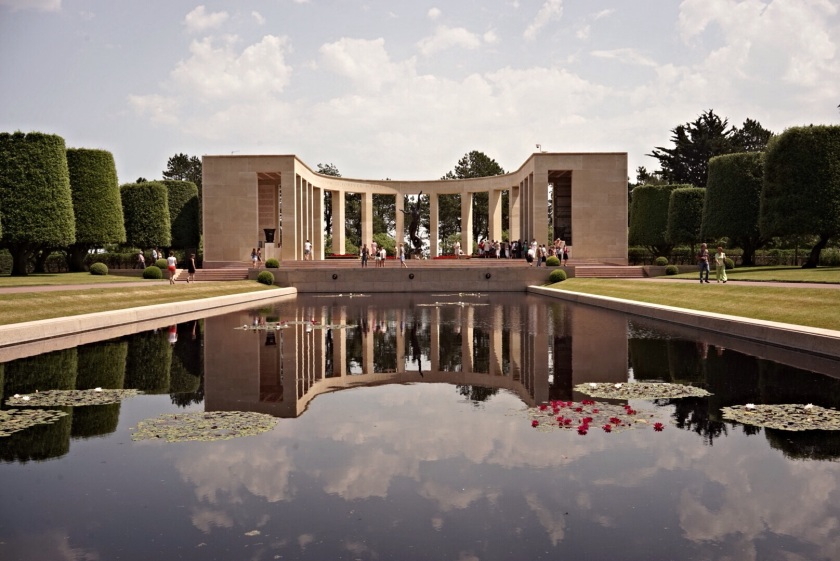 A quiet, solemn reflective space which is serenely beautiful and surprisingly moving, humbling even.
Simple white identical crosses, perfectly symmetrical, leading across the lawns and towards the beach, each with the name, company and date of death, except those marking unknown soldiers. 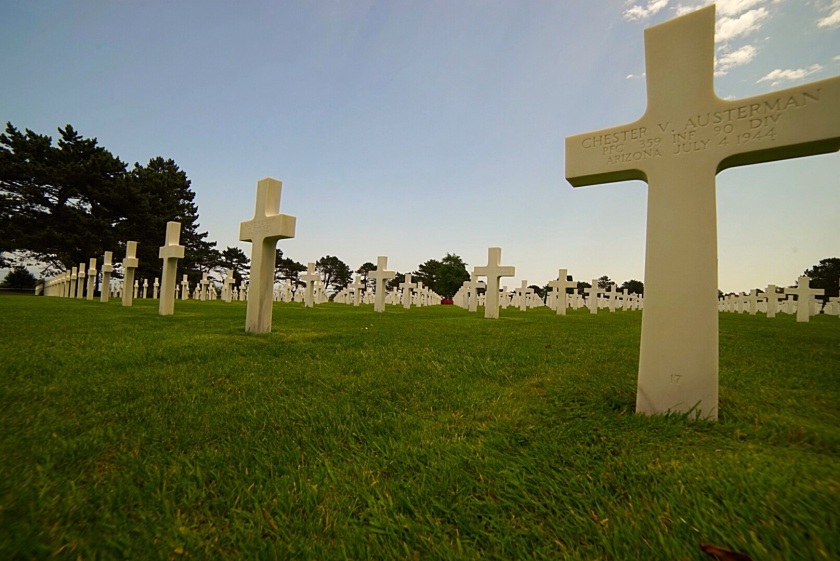 The Americans can be overly sentimental but this is beautifully done, dignified yet powerful, simple but strong, honouring and respecting the memories with uncharacteristic restraint.

We spent over two hours looking through the memorial museum then just wandering around the cemetery reading names, places and dates.

A very emotional space overlooking one of the landing beaches it all started from.
Once again if you’ve seen Private Ryan you would NOT recognise the beach, filled with scene after scene of destruction, terror and horror… now a beautiful sandy oasis.

Surprisingly big, about 4 kms long and with tides it’s just a lovely beach and on a very hot day filled with people sun baking and swimming.
It makes it hard to imagine the horrors of that day 71 years ago.

Up on the hill is an old battlement position or two left as permanent, crumbling reminders.
Another of the landing spots is Utah Beach which we drove to next, about 30 minutes north, which has a monument and tribute to the naval contribution.
Unless you were a military buff probably not a lot to see here, so just a short stop for us before heading back to Bayeux after a solid 12 hours on the hustings.
A most rewarding day, absolutely fabulous.