Yesterday was huge, we walked about 25km all over the place, so how better to start the day than for Rachael to go for a run around Retiro Park again, while I walked around taking photos.

It truly is a wonderful park, and the crystal palace is majestic especially earlier in the day with the reflection from the sun hitting it. Which would have been great if there had been any sun!

The weather in Madrid has been pretty ordinary for our stay, unlike Barcelona where it was quite warm. Not to worry, we loved Madrid which is as different to Barcelona as two towns can be. From narrow cobblestone lanes, to wide boulevards with plenty of greenery and park land aplenty.

The brash ‘in your face’ hustle & bustle of Barca, to the understated elegance of Madrid is not unlike the difference between Sydney and Melbourne. Both great cities, and it would be a shame to visit Spain without visiting both, as they offer different slants on the Spanish way of life, and the people living within their walls. One thing I have heard about the Spanish, but haven’t yet experienced, is their driving skills, or lack there of! Well that’s about to change, as it’s car hire time! Wrong side of the road, gear changing with the right hand, looking left not right, driving in the gutter for the first couple of days. What could go wrong? Well, actually…nothing, yet!? Finding the hire car joint tested the patience, but once set up we were off out of Madrid, on our way to Caceres for the night. The tolls were cheap (take note, Italy!!), and the roads virtually empty (you hearing this Italy?). 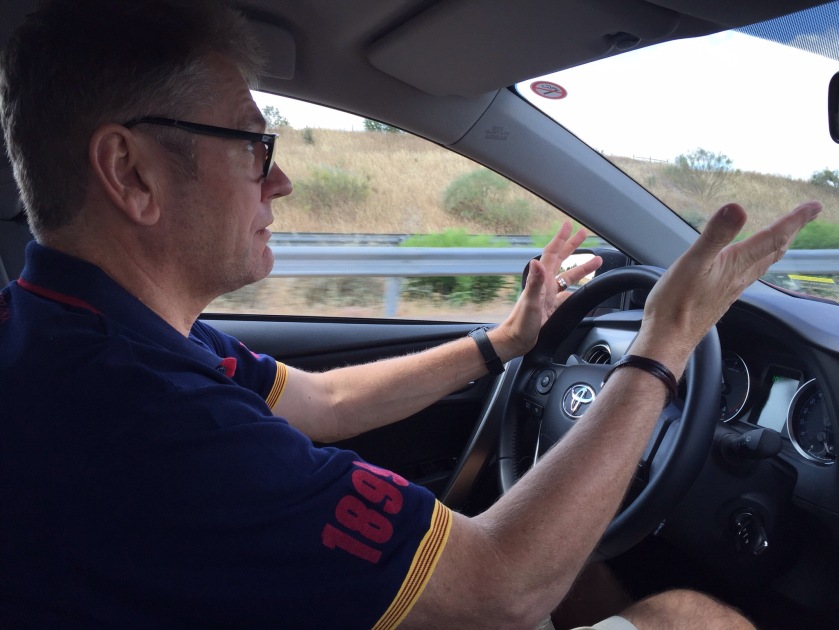 We whooshed to Caceres in no time, all 300 km’s of it! So effortlessly did we do it, we proceeded to drive right through the main “traffic free” plaza looking for our hotel. Oops! For months now we have wondered how to pronounce Caceres, and finally our questions have been answered. ‘Carth…eee…res’

Caceres is a Unesco listed heritage site, with the most spectacular old city behind those wondrous walls only Europe can do. It sits high up on the hill, full of winding cobblestone lanes (yep, again!) covered with stone building on all sides, leaving the sun to fight it out with the shadows!

Here is this outstanding setting with barely a soul in sight. Put this in France or Italy and it would be packed with tourists, beggars, and every tacky souvenir shop and gaudy restaurants pushing ‘authentic’ meal deals! And a ticket booth at the front entrance!! We basically had the joint to ourselves for the late afternoon, before people started to trickle on for drinks and dinner later in the evening.

We had a couple of drinks at a bar overlooking the plaza, then regrouped before dinner at a very Spanish time of 10pm. We found the most brilliant little tapas bar in the walled city, where we settled in to enjoy a few tapas, plus associated beverages.

Fantastic food, from gazpacho with cured ham to pigs snout with coriander! That one was for Rachael!!? Finished with another of Rachael’s staple dishes, rice pudding!! Man, she is building a whole new culinary dictionary this trip! I had a Spanish sherry, Pedro Ximenez, with the pudding which Rachael likened to church wine! If this was the church standard I would have attended more regularly!!

1am finish to dinner, and to digest, sleep. Probably not ideal but we are still getting our heads around the whole midnight feast thing the Spanish call dinner!