First things first….I’m writing this update under duress, I have just discovered the evil powers of Sangria! So has Rachael, who is having a siesta!!

Right!
Day three…started with a run amongst the yachts and cruisers of the marina and the Barceloneta, followed by coffee/croissant/fruit salad brekky at the La Boqueria which is growing on us by the minute. A great market place!

We spent the rest of the day wandering around the Barri Gotic, La Ribera & El Born districts, which are all tightly bound within the old town. Fabulous laneways filled with shops, bars and historic buildings, including the Santa Maria del Mar Church which is the exact opposite of the Sagrada Familia….dark, somber, foreboding!
We thought we had hit the jackpot upon reaching the Picasso Museum to find no queues….and no open doors!!! Not open on Mondays!

We had what was supposed to be a quick lunch at the Caterina Market, but turned into an hour long battle of wits between the bored waitress and the cranky Aussie tourist.
We became invisible man/woman both before we got served, when our meals turned up intermittently ten minutes apart, and when we waited forever for the bill!
Baguette and coffee to go from now on for lunch! 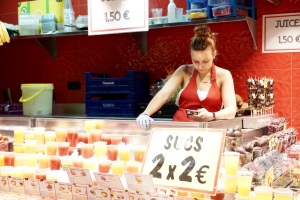 A bit more shopping in the arvo, before a rest, then off to meet Nicholas for our six hour photographic tour 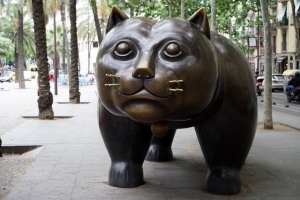 Poor Rachael been put through six hours of walking around Barcelona while Nicholas and I discuss photos, first thru La Boqueria market. 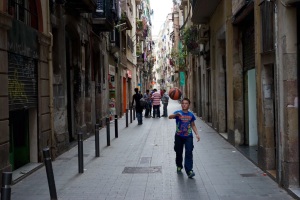 It was great to see another side of this great city, firstly through El Raval, which is pretty grungy. Streets filled with dodgy characters, not to mention the rubbish, and a potpourri of multicultural desperation and dispair. We were too early to see it, but later in the night is not the place for a tourist to venture safely, but it was an interesting side to see and photograph.

The arch way below shows the Catalonian flag, which generates much pride amongst the locals, so much so that they are trying to force a vote to segregate from the rest of Spain. Very proud people, who seem to identify more with France than Spain.

The photo of the the pock marked wall is caused by a bomb blast that killed over 40 citizens in the Gotic quarter during the Spanish civil war. The tiny square is much visited, and revered.
We moved from there back into the Barri Gotic, La Ribera, and El Born area’s, checking out Spain’s Arc de Triomf with its miriad of joggers, bikers and rap dancing dudes. 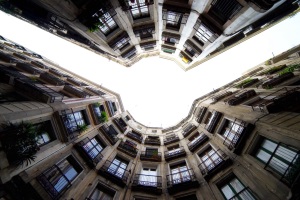 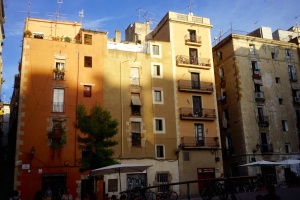 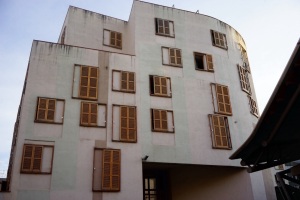 Great shutter action on this building, and the mystery of the laneway! 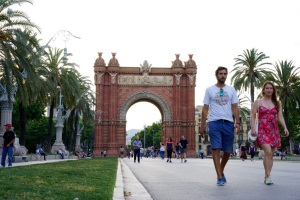 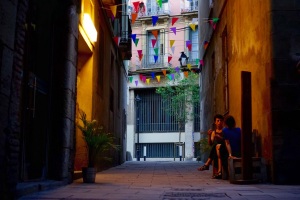 Off to Montjuic, which is a train trip away. More walking, getting dark, keep walking.
Poor Rachael, the veritable shag on the rock. Me all involved, Rachael, sugar levels plummeting.

Finally, six hours and God knows how many kilometres later, Nicholas bid us adeu, after what was, for me, a fabulous opportunity to learn from a professional photographer the ways and how’s of better photos

So, it’s 11.30pm, and we haven’t had dinner, which is no problem in Spain as they eat soooo late, we find a spot, tuck down and are back home by 1am. Stuffed!!
According to the fancy app on the iPhone we have walked 39000 steps, and 33km today. No bloody wonder our feet are shot to bits.

Thanks baby, my shout next time.